Find out when the team member is at a branch near you!

Greetings! We are the Digital Services team at JCLS: Laura Irwin, Leia Pastizzo, Jacob Spilman, and Eric Molinsky. We are here to help you with all of your digital services needs. This includes, but is not limited to, Library2Go, Hoopla, and Overdrive. Our home base is Medford, but we are visiting most library branches in Jackson County on a weekly basis. Below, you'll find a brief introduction to each member of our team. We look forward to seeing you and helping you with your technology-related questions, bewilderment, concerns, and fears.

Laura Irwin has an eclectic background and has had the opportunity to learn a wide variety of subjects over the years. She’s had the chance to learn how to (mostly) bend computers to her will, as well as how to use numerous nifty gadgets. She has earned a Bachelor’s degree in music and enjoys singing and dancing when no one is looking. She began working for the library system in 2009 and has had the fortune to gain experience in many different aspects of the library system, and she hopes to always be a part of the library world because it’s her favorite place to be.

Jacob Spilman was born and raised in the southern Oregon region. From a young age he was interested in technology, whether it was disassembling his Super Nintendo, building a personal computer or editing school film projects. Before working with the library system, he primarily worked with the mental health population in various occupations assisting people in the community. When not tinkering with technology, he enjoys spending time with his wife, cooking, playing music, watching B-movies and traveling abroad.​

Nicole Vukcevic "I moved to Southern Oregon in 2003 and got my Bachelors in Human Communication at SOU. I love helping people with their technology and learning about new tech. I have two dogs and one cat. In my free time, I love to spend time with my husband, read, and play games, crochet, bake, and cook. I am a huge fan of Marvel, Doctor Who, Star Trek, and Star Wars. I have an eclectic taste in music but really love jazz, swing, and classical music from the ’50s and ’60s, and '80s music. I enjoy traveling, when I can, and have an extensive bucket list of places I would love to see one day."

Leia Pastizzo began working for the Jackson County Library as a volunteer in 2014, and kept at it all the way to a full-time job. Leia got a BS in Sociology and Anthropology from Southern Oregon University and found her way into library-specific technology from that. She is primarily interested in computers as a social tool, and how they can be used to benefit people from all walks of life. In her spare time, Leia enjoys spending time with her giant dog and pursuing any and all artistic interests. Her favorite book is Lord of the Rings, closely followed by The Tao of Pooh.

Eric Molinsky learned about computers and the internet during the last decade of the 20th century at a public library. He joined JCLS in 2001, and has done it all from shelving to branch management, and was an early adopter of digital reading technology. In 2011 he was involved in the creation of Patron Technical Support, now superseded by the Digital Services department, which he supervises from his lonely but tech-laden office on the eighth floor of the Medford Library Tower. He enjoys reading narrative history, fiction by writers who know how to turn a phrase, and adding to his archive of digital music. He lives in Medford with his wife and son, both of whom are smarter than he is. 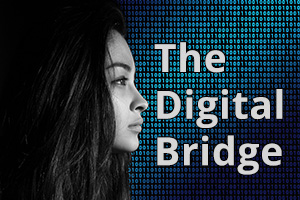 Need some help bridging the digital divide? The digital bridge blog is here to help you make the most of your technology, online services, and good things to be had in the 1s and 0s.