Skip to main content
It looks like you're using Internet Explorer 11 or older. This website works best with modern browsers such as the latest versions of Chrome, Firefox, Safari, and Edge. If you continue with this browser, you may see unexpected results.
All JCLS branches continue to offer enhanced front door service during regular operating hours. In-branch browsing is unavailable. Limited computer sessions are offered on a first come, first served basis. More Info.
Due to the upgrade of the library catalog, the system will be unavailable from 4:00 PM on Sunday, April 18th until 8:00 AM on Monday, April 19th. We apologize for any inconvenience this may cause. More Info.

The Young Adult Library Services Assosication (YALSA) Teens' Top Ten is a "teen choice" list of 25 teen-nominated books from the previous year. Readers ages twelve to eighteen are invited to vote here for their favorite online between August 15 and Teen Read Week™ (October 7-13, 2018). The winners will be announced the week after Teen Read Week. 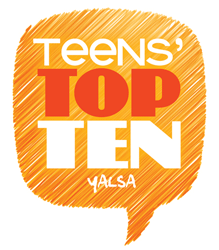 Vote for your Favorite