The Booktalk Program aims to get kids excited about reading and is offered free to schools throughout Jackson County.

Booktalk for THE AMBROSE DECEPTION by Emily Ecton 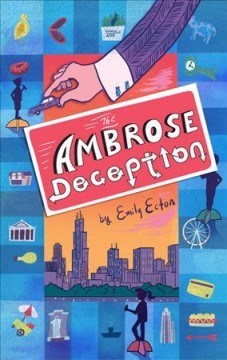 Melissa isn’t in the honors classes. She hasn’t joined any after school clubs. She doesn’t plan on a sports teams. So everyone is surprised when she gets selected as one of only three middle school students in the entire city of Chicago to compete for a prestigious $10,000 scholarship.

Melissa knows she probably has no chance of winning (the school guidance counselor was clear about that), but she could certainly use the cash. Then she wouldn’t have to keep selling worksheet answers for lunch and bus money for herself and her little brother.

At the first informational meeting about the scholarship, Melissa meets the other two contestants: a bouncy, clownish boy named Bondi, and Wilf, who seems like a slacker kid. After some initial paperwork, they’re each given a packet with three clues to solve. The first person to solve all three of their clues will win that amazing $10,000. But that’s not all. They also each get a cell phone, a debit card (with pretty much as much money on it as they could to spend), and a personal driver to take them anywhere in Chicago.

The three kids respond differently. Bondi celebrates with a coke and sundae. He dashes off an answer to his first clue right away. Wilf immediately pulls out the phone, summons his driver, and heads off to a baseball game for fun – without even looking at all his clues. Melissa walks to a plaza, sits down, and starts carefully reading through her packet. Maybe she could actually win this?! But then she sees the clues. They’re ridiculous. What could it mean, “Go to 1910 for ice cream, then stick around to watch the newborns”??? She’s mad at herself for getting her hopes up.

It’s not long before all three kids begin to wonder if the whole contest is a sham. They’re not supposed to talk to each other—or anyone else—about the clues, but it’s going to take joining forces to unravel the truth of what’s going on. As it turns out, there’s much more at stake than a simple scholarship.

Anna’s take on it:

This is a satisfying mystery, with puzzling clues and unexpected twists. I used it as the first book in my 5th/6th grade booktalk presentations last fall, and it grabbed kids’ attention. They definitely thought it would be great to win $10,000.

Enter your e-mail address to receive notifications of new posts by e-mail.